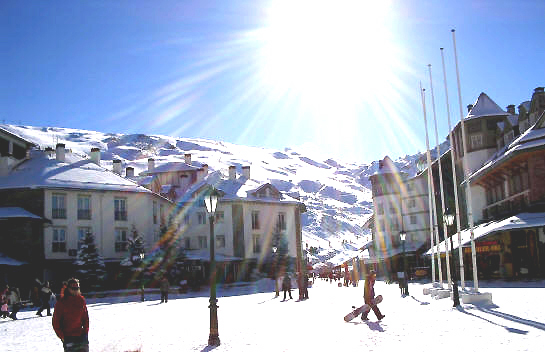 Granada is one of Spain's most distinctive and cherished cities and for good reason. Along with its magnificent Alhambra, this lively Andaluz city charms visitors with genuine flamenco venues, awe-inspiring Moorish sights, and a free tapas culture that's impossible to find anywhere else.

However, what really makes Granada one of the best winter destinations in Spain is its privileged geographic position at the foot of the snow-capped Sierra Nevada mountains, yet only 30 km from the sunny Costa Tropical. Consequently, travelers have the opportunity to indulge in sightseeing, hit the slopes of the nearby Sierra Nevada, and warm up in the city's fabulous Arab baths.

Situated 21 km southeast of Granada, Sierra Nevada is Europe's southernmost ski resort and prides itself with bright sunny days, a lively après-ski scene, and around 2,500 hectares of skiable area.

There are different ski courses offered at the Sierra Nevada resort that have been created by both American and European specialists. These courses include skiing over 61kms of snowy slopes that is spread over 39 different types of ski runs including 6 spectacular off-course trails.

With a vertical drop of 1,300m, the Sierra Nevada has snow areas that cater to different types of skiers. So whether you are a beginner or an expert, you can enjoy skiing here. These are the same slopes that were used during the World Alpine Ski Championships in February 1996 in Spain.

There has been a new change in the Sierra Nevada resort in Costa Tropical with the introduction of a new chairlift that replaced the previous Montebajo lift. With this new introduction, the carrying capacity of the lifts has increased to 31,965 passengers in an hour. This commendable achievement has been made possible with the help of 19 lifts including 12 chairlifts (4 of them are detachable), 2 gondolas, and 5 ski lifts. The ski lifts are operational for public use from 09.00am to 0430pm everyday although you should always check their schedule especially during bad weather conditions. These lifts also operate on Friday and Saturday evenings for night skiing.

One of the major events in the Sierra Nevada resort in Costa Tropical is the investment made on the latest snow-making system. The snow making system is considered to be the largest in the country and can easily compete with some of the best in Europe. This system is able to create snow even if no snowfall takes place and hence the Sierra Nevada resort is guaranteed of skiing slopes.

In a new move, the same system was introduced to the upper regions of the El Zorro ski course. In the last couple of years, there has been an increase in the number of guns with Sierra Nevada Resort having 200 cannons that comprise of 187 high pressure and 13 low pressure units, which can produce almost 1,940 cubic meters of snow every hour.

Night skiing is one of the major attractions of the Sierra Nevada resort and is also one of the most exciting options. Night skiing on the Sierra Nevada resort in Costa Tropical was first introduced in 1994. This was made possible by lighting the entire length and breadth of the El Rio slope (3km/545 vertical drop), which was followed by the Slalom course (1,100m vertical drop).